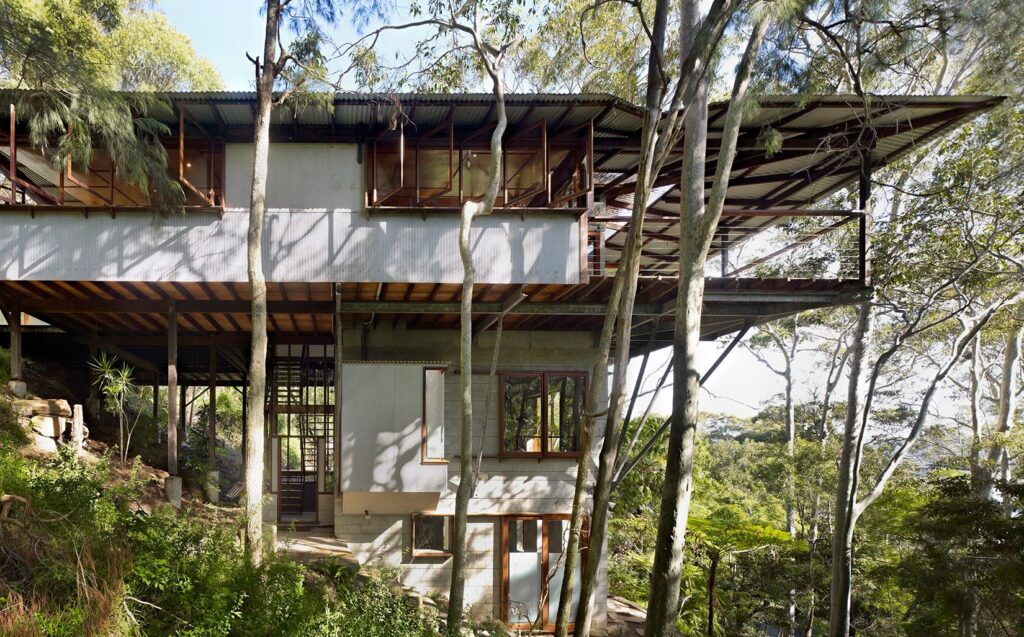 In the last few months, Canopy Keepers has received much feedback from residents concerned about the number of DAs being passed for increasingly large homes. Blocks cleared of all vegetation before a build is becoming an all-too-common, painful sight.

We reached out to long-term resident and architect Peter Stutchbury for his perspective on our rapid loss of canopy, and how to approach development in a more considered way. Stutchbury is one of the most celebrated architects in Australia, best known for his commitment to designing buildings that connect with nature and the landscape.

You first moved to Avalon in the 1980s.
Have you seen big changes in the local environment since then?

In terms of wildlife I have, definitely. We had 74 koalas when I first came to Avalon, and then Layton’s did a development of Pacific Palms in the middle of Avalon. I went down and stood in front of a bulldozer. I said, “You’re going to kill the koalas. You’re taking out the swamp mahogany – they’re a koala feed tree. And this is a koala corridor between Stapleton and Angophora Reserves.” And they said, “Oh no, we’re not going to do anything like that.” Within two years, all the koalas were dead.

So, this whole thing of development versus sustainability has been a topic for as long as you can remember. And it’s got to do with greed versus sensitivity. The majority of the population would prefer to make money out of development rather than do it in a way that allows everyone, including animals and birds, to exist equally.

At the last count, Pittwater was losing canopy faster than any LGA.
Why do you think this is?

I think because residents don’t understand the benefits as much as they should.

The land is shaded by trees and therefore the land is cool. And when the land is cool, we limit climate change. Trees transpire and give off oxygen. We also forget that trees communicate. They’re not just a single item – they’re a community of beings. So I think it’s very ignorant of us to just willy-nilly cut down trees. And we’re doing it through the Amazon rainforest, we’re doing it across central New South Wales. We’re doing it all over the place, and on the peninsula we’re doing it with the view that bigger houses are more important than vegetation. And what a limited view of the world that is.

Traditionally, gardens were more important than the house itself. It’s only been since the advent of air conditioning that the house has sort of started to dominate that domain, so you go into the house to cool down as opposed to go into the house to cook dinner. And in fact, you can cook dinner outside equally, if not better. So, I think it’s ignorance that puts us in the position of cutting down trees. And if you sit back and you think that a view is more important than shade and habitat and oxygen and continuity and historic value, I think we’re a really shallow society actually. I don’t think we’ve got much substance at all.

The average size of new homes in Australia is more than 230 square metres – the largest in the world. Why are we so locked into this idea we need a massive home?

I think at the end of the day, it’s just people indicating that they’re very wealthy. You don’t need a big house. All of my generation were brought up in 140 square metre houses and I can’t remember ever being uncomfortable. If you look at Papua New Guinea, look at Africa, or you look at Japan people live in houses which are 70 square metres or less.

And big houses are a cost – they’re a concern in terms of maintenance and energy management and that sort of thing. And they really are a diversion from our society. They really are an extreme proposition for living and I think that’s going to come crashing down within 20 years, if not 10.

Many people see trees as an impediment to a view.
How do you see the aesthetic of trees in terms of the outlook from a home?

What I think people in general don’t appreciate is that looking through a forest – or being under a forest and looking at a view – is essentially a different experience than being on a beach where there is no forest. Those different kinds of experiences contribute to your knowledge and your wisdom. It’s not just one or the other.

I’d say the benefit of looking at a view through a tree is the wind break that the tree offers, or the shade, or the smell after the rain, or the activity that it promotes. A tree adds dimensions to the view. It adds scale to the view. It adds light and shade. It contributes all these extras which you wouldn’t get otherwise. And I think that as a public, somehow, we’ve been suckered into this proposition where “the view” is the ultimate thing we need.

How do you go about incorporating existing trees into a design?

On the other hand, we strive to protect the locality in its totality, which means analysing the site and working out what needs to be retained and what doesn’t. There’s a recent submission where they believe wholeheartedly that putting a garden on the roof equalises the loss of the trees! That submission completely misunderstands how trees operate, and it misunderstands age and time and maternity. But our council permits that sort of points-balancing.

There’s been more than a few constructions lately where the whole hillside is wiped away first before building – how much damage does that do to surrounding vegetation?

Oh, that would probably affect maybe five blocks, maybe more, either side. It changes the local micro-organism environment totally. And in terms of drainage, it’s a complete nightmare. And I couldn’t help but cringe when I saw the one at Palm Beach that completely massacred the rock ledge. And there’s a couple of reasons for it. One is that council requires off street parking and people just go – “I’ll dig a hole”. And the other thing is designers just don’t really think about the site. There was the most beautiful layering of rocks there – and they just came in and massacred them. And they’ve got huge retaining walls with back-propping, which would indicate that what they have done is incredibly negligent. So, it’s actually a lack of respect. And the problem is these wonderful prime sites are often owned by people with a lot of money and not much idea of how to be sensitive.

What is it that clients most value about living in your homes when you meet with them years down the track?

We’ve always striven to connect people with nature. I was a surfer and a farmer and I was incredibly aware of nature and had a deep respect for it because I could see how important it was to our survival 40 years ago. And so, all our houses have a relationship with nature – some prophetic, and some as much as they can get in an inner-city environment.

I have found, over the years, that that embodied relationship with nature gradually becomes part of the people who live there – part of their psychology and behavioural patterns and that sort of thing. And nature is a good influence on you. If you go camping or if you go to the blue mountains or bush walking or whatever, you feel incredibly nurtured after a day of nature. So, the people that live in our houses generally have at least a connection with nature, but more than that they have an appreciation for what’s going on around them. So, if you said to them, when do the king parrots come into the area? They’ll be able to tell you. But you ask anyone who lives in a different type of house and they’ll say – “I’ve got no idea”.

So, what we try and do religiously is connect people with where they are. And through that connection, we hope that there’s a sense of responsibility. So, they maintain that place, they don’t disrespect it. And that’s been the long-term ambition.

Is there anything else you would like to add?

Just that, if we’re going to choose to live in an area like this, respect the area first. If we don’t want to do that, then we should go and build somewhere else where a big house is acceptable. What is slowly happening is the qualities of this place which we call the peninsula will be eroded. And eventually it will become just another suburb with some nice beaches. It won’t have that overarching notion of environment where animals and people live together and where trees provide shade and sustenance. It’ll become more like a desert, a bit more like a wasteland, where the cafes are more important than the environment and where the cars are dominating the local landscape.

It’s not hard to preserve what we have, but we have to make a conscious attempt to do it.